Bordered on the west by Sussex Drive, on the east by King Edward Street stretching northwards to Boteler Street, while to the south it is bordered by Rideau Street. The name refers to the old ‘By Ward’ of the City of Ottawa (‘By’ deriving from the surname of the engineer, Colonel John By, who was the area’s original surveyor). The district comprises the main commercial part of the historic Lower Town area of Ottawa. 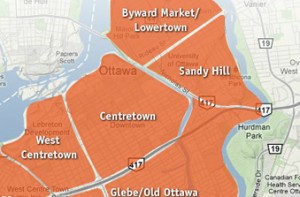 This is the liveliest area for the young and single in the Nation’s Capital. Including many restaurants, bars, pubs, clubs and shops. Enjoy walking to the farmers market for fresh treats and don’t forget the Rideau Centre Shopping Mall!

While condos are abundant there are also detached and semi-detached homes to be found. Living in the Historic “John By’s Market” area – who would want more?

Homes for sale in the Byward Market